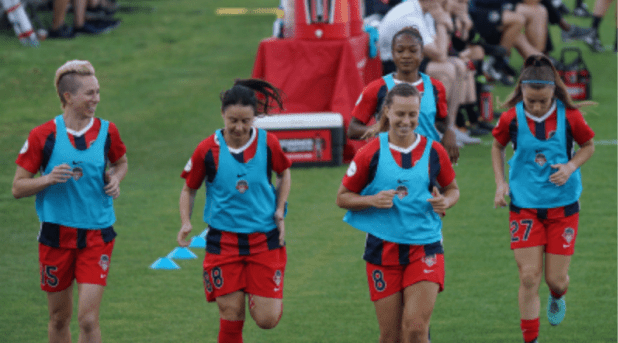 From injury prevention, bodily preparation, and increased mental focus, a quality warm-up is vital. In this article we'll dive into what makes a warm-up great and include some fun ideas you can use with your team.

The Importance of An Effective Warm-Up

Warming up before a football match or training session is essential to prepare the body for activity and focus the mind for what lies ahead. Here’s a quick overview of some of the most important benefits of a proper warm-up:

On a physiological level, a warm-up gradually increases heart rate and blood circulation so that the body’s cardiovascular system can transport and deliver the nutrients muscles need for football activities effectively. In addition by preparing the body steadily, acute injuries such as strains or pulls are much less likely to occur.

In terms of mental preparation, a quality warm-up provides an opportunity to clear the mind and focus on the task at hand. It effectively sets the tone for the upcoming practice or game. In this article we'll go over seven ideas for effective, fun, and engaging warm-ups.

If you're more of a video person, the video below highlights five extremely simple and effective warm-up ideas.

In order to ensure that the body is adequately prepared for the impending work load, it’s vital that a warm-up includes similar movements to what the players will be doing in a match. Warm-ups that encompass a wide variety of movements and extend a player’s range of motion are especially effective. This can be accomplished by having players perform various different dynamic locomotions. A general dynamic warm-up can easily be administered by having players in two lines and performing these locomotions back and forth.

With that being said, dynamic locomotions can be incorporated into a wide range of different formats and warm-up activities and there are plenty of different movements to choose from. Here are some common ones:

Warming up can also provide a great opportunity for players to practice fundamental technical skills such as dribbling, trapping, and passing. Since a coach's time with their players may be limited, incorporating technical skills into a warm-up is a great way to kill two birds with one stone and accelerate player development. Here's a few warm-up ideas to help players practice the fundamentals:

In the speedy dribbling warm-up players dribble through cone gates to practice maintaining control of the ball. Once players are warm, this exercise can easily be made into a competition by seeing which player can dribble through the most cones in a given amount of time.

Passing Down The Field

This simple partner passing warm-up allows players to work on passing fundamentals with minimal set up from the coach. Players just need a partner and a ball as they pass back and forth from one end to the other. This drill also works great with headers or volleys.

Another drill requiring minimal set up, juggle for distance is a game where players in pairs juggle down the field, trying to keep the ball up for as long as possible. The team that makes it the furthest without the ball hitting the ground wins!

Tag games can be a fun and competitive way to get players moving. They work especially well when trying to develop speed, agility, and quick reactions. Keep in mind players shouldn't run full speed right at the begining of practice so performing some dynamic movements beforehand is a great way to ease into these activities.

1v1 tag is a fun exercise where runners try to get to the other side without being tagged. The taggers typically start by sitting down or performing an exercise at the beginning so that the runner has a slight advantage. This encourages the runner to move as quickly as possible as soon as they start.

Relay races are another great way to get players moving at top speed in a fun and competitive environment. Relay races can incorporate different movements such as those used in a dynamic warm-up or be used with a ball to practice technical skills like dribbling and passing with pace.

In this simple dribbling relay players dribble as fast as they can around the final cone and then back to their starting spot before sitting down to show that they have completed their leg of the relay. The first team to have all of their players sitting down wins!

Similar to the dribbling relay, in this variation players weave in and out of the cones to work on keeping close control of the ball.

A rondo is a keep away style drill where one team with numerical superiority tries to keep possession while the other team tries to dispossess them.

'Everything that goes on in a match, except shooting, you can do in a rondo. The competitive aspect, fighting to make space, what to do when in possession and what to do when you haven’t got the ball, how to play ‘one touch’ soccer, how to counteract the tight marking and how to win the ball back' -Johan Cruyff

Many professional teams like to start training sessions and match warm-ups with some sort of basic rondo keep away variation. Most popular is the 4v2 rondo where four players in a circle have the ball against two defenders in the middle. If a defender wins the ball, they swap places with the player who lost it.

Since rondos are so effective to improve player's reactions and touch, here are a few other great variations of rondo drills:

In this rondo variation each offensive player stays on one side of a square. If the defenders win the ball they have a 2v1 advantage as they try to score on one of the outside goals.

The three team possession drill is a variation played with three teams, each of which starting in their own zone. The ball starts on one side and the team in possession tries to complete a certain number of passes in a row before sending the ball to the other side for a point. Meanwhile, the team in the middle sends two players in to try to win the ball back. If they manage to take the ball away, the team that lost it becomes the new team in the middle.

In find the killer pass, the team in possession gains their numerical supieriority through the inclusion of neutral players who play all time offense. The object of the game is to complete a given number of passes and then find a teammate in the middle for a point.

Small sided games can be a great way to mimic in game action on a smaller scale so that players can get lots of touches on the ball relative to what they would recieve during a full sided match. Taking this into account, mini games can be a great addition to a warm-up routine after a dynamic warm-up. Simply play 3v3, 4v4, or 5v5, or add some wrinkles to create a new variation like the exercise below.

This small sided game variation is a fun take on the classic 4v4 where the team in possession can also pass to neutral players. This ensures that the attacking team always has an advatange for fast paced action and lots of goal scoring opportunities.

When players are sufficiently warm, spending some time to hone player's finishing abilities can be a good idea. The exercises below function especially well to get strikers and goal keepers fully prepared and up to speed before a match.

The rapid fire shooting drill is an extremely simple finishing drill where players dribble out to the top of the penalty area, turn around, and have a go on goal. For quick action, the players on the opposite side can start dribbling forward as soon as the previous player reaches the top of the box.

3v2 to goal is a great way for players to work on finishing because the offensive team outnumber the defenders. With this in mind, there should always be an open player to get off a quality shot.

If you'd like more warm-up ideas you can check out all of our favorite warm-up drills here. We constantly add new exercises to our library and hope that you find these resources helpful.