An effective warm-up is important for many reasons from injury prevention, bodily preparation, and increased mental focus. 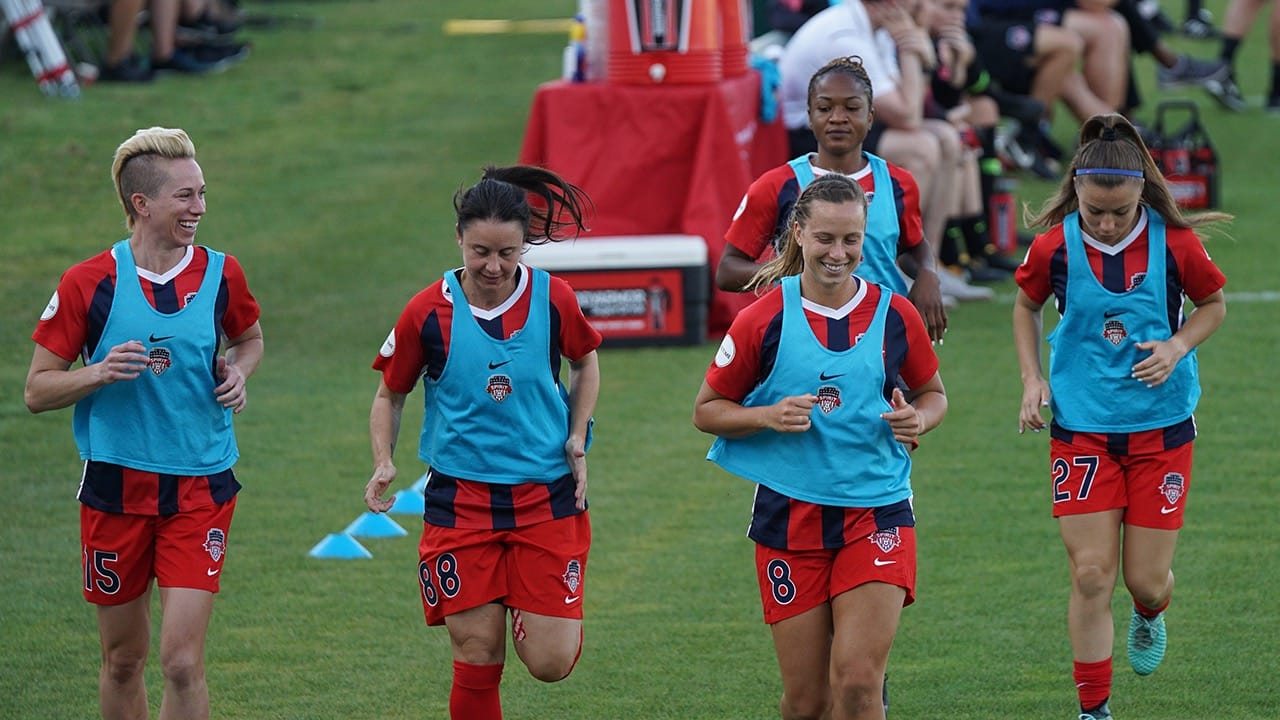 From injury prevention, bodily preparation, and increased mental focus, a quality warm-up is vital. In this article we'll dive into what makes a warm-up great and include some fun ideas you can use with your team.

The Importance of An Effective Warm-Up

Warming up before a football match or training session is essential to prepare the body for activity and focus the mind for what lies ahead. Here’s a quick overview of some of the most important benefits of a proper warm-up:

On a physiological level, a warm-up gradually increases heart rate and blood circulation so that the body’s cardiovascular system can transport and deliver the nutrients muscles need for football activities effectively. In addition by preparing the body steadily, acute injuries such as strains or pulls are much less likely to occur.

In terms of mental preparation, a quality warm-up provides an opportunity to clear the mind and focus on the task at hand. It effectively sets the tone for the upcoming practice or game. In this article we'll go over seven ideas for effective, fun, and engaging warm-ups.

If you're more of a video person, the video below highlights five extremely simple and effective warm-up ideas.

One of the most foundational pieces of a strong warm-up is the inclusion of dynamic stretching through locomotions such as skipping, hopping, quick feet, and more. Including a wide variety of different movements is a great way to help players prepare their bodies for wider ranges of motion while increasing heart rate and blood circulation. Here we've listed out some great movements to start any warm-up with and help players prevent injuries as they move into more intense activities later on.

There are lots of different set ups coaches can use as players perform dynamic locomotions such as having players in lines, all at the same time, incorporating work with a ball, or even transitioning into relay races which we will cover next!

A relay race is essentially a competition between teams where each member of each group must complete one leg of the relay (such as running down the field and back) before the next player on their team can begin. The first group to have all of their members complete their part of the relay wins! Keep in mind, this works best if all teams have the same number of members. If one team has fewer members, they may need to have someone complete their portion twice so that every team has done the same amount of work.

Relays are super easy to set up and they can be fun and competitive exercises for coaches to add to their warm-up plans. Just be sure that players have had a chance to get their bodies moving a bit before running and racing at top speeds! It can be great to start with a general dynamic warm-up in lines, then from the same structure transition into races when the players are warmed-up and ready. Really races can be done with dynamic movements (like a skipping or galloping race), with dribbling, passing, and more!

One of our personal favorite relay races is the slalom dribbling relay where players weave in and out of a set of cones down and back before the next player in line gets the ball to complete their leg of the relay.

We're just going to come out and say it- rondos are amazing! Similar to keep away, a rondo is a style of drill where one team with more players is tasked with keeping possession of the ball against a smaller number of players who are trying to take the ball away. Almost everything that goes on in a match with the exception of finishing players can learn from a rondo. How to communicate, how to pass, how to create space- and vice versa on the defensive side such as how to pressure the ball, how to close off passing lanes, etc.

Rondos are a great way for players to sharpen their touch before training or a match, and also get dialed in and focused mentally. Rondos can come in all shapes and sizes! Traditional rondos typically include 4 or 5 players on the outside against 1 or 2 players in the middle. In this variation once a defender wins the ball, they swap to the outside while the player that lost it becomes a defender in the middle. However with a little creativity, there's a limitless aray of what you can do with rondo drills. This video describes 7 of our favorite rondo variations.

In essence, there's not a huge difference between rondos and possession drills. In both cases players work on keeping the ball, although possession drills and games can be played on a larger scale and with even numbers of players on each team. Possession drills also will often include a target or a goal such as after a team completes a given number of passes, they can try to achieve points by playing to a target player or going for goal.

The following drills are great examples of possession games. You can click on each of these drills to see a full description of how they work.

Keep Away To Target Players

The 3 Team Possession Drill is almost always a player favorite and as a former high school coach in the US, I used to use this drill for 10-15 minutes in almost every pre-game warm up to get players both mentally and physically sharp.

We also made this video on our YouTube channel where we describe some of these classic drills in video format as well as provide even more ideas for great possession drills.

Tag games are very fun and engaging, especially when working with younger teams and players. In rock, paper, scissors tag players play rock, paper, scissors and the winner becomes the tagger while the loser has to run away before they have a chance to get caught. You can click the images below for full descriptions on how these tag games work.

Not only are tag games fun but they also offer a great way for players to work on speed, reactions, and quickness.

Warm-ups can offer a great opportunity for players to sharpen basic technical skills such as passing and dribbling. Some of our favorite warm-ups to improve passing include passing down the field, diagonal short-short-longs, and numbered passing.

Finishing is a skill that a coach would rarely want to start a warm-up with at the beginning because players should already be pretty warm-up before shooting on goal. That's why we've listed it last here! With that being said, finishing is an important skill and towards the end of a warm-up can be a great time to for players to hone in on finishing accurately and powerfully before a training or a match.