In this article we look at how to improve shooting accuracy, power, and technique with these tips and exercises so you can score more goals. 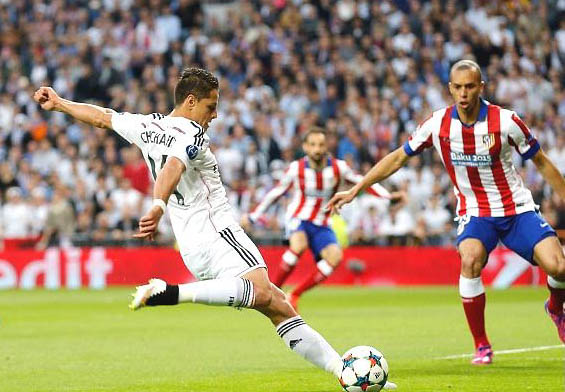 You miss 100% of the shots you don’t take – alright, alright, I know this quote came from legendary hockey player Wayne Gretzky, but it’s every bit as true in a soccer match.

In fact, it may be even more true with soccer.

Consider this, in an average NHL match you’ll see just over six goals. In an average soccer match you’re lucky if you see three goals. A single goal in soccer is an extremely meaningful event! So it goes without saying, the ability to finish chances can be the difference between winning and losing the game.

With this in mind, becoming a master shooter is tough when one considers all of the variables that can affect a shot. Think about it, shooting opportunities are rarely clear cut given the fact that you’ve usually got a swarm of defenders doing everything they can to try to win the ball back. To be great at shooting you’ll have to be able to finish from different angles, areas on the field, with both feet or other parts of the body, and in some cases, you may even be off balance with defenders closing in.

In this article we’ll take a look at how to shoot properly in soccer with techniques to improve power, accuracy, and drills to help you and your team find the back of the net more often.

When it comes to shooting in soccer, there are two basic techniques- power, and placement. Depending on the situation, one type of shot may be more appropriate than the other and great strikers are masters at selecting the right type of shot for each given scenario.

Regardless of technique, keep in mind that great shooters didn’t become great overnight- they’ve taken thousands of shots and got to where they are through hard work and dedication. Always remember practice makes perfect.

When you’re going for power, the rule of thumb is to hit it with your instep. Or ‘hit it with your laces’ as they say. Powerful shots are most effective when you’re shooting from long distance or if you’re trying to blast it past the keeper. Here’s a few technical pointers to successfully perform a powerful shot:

-Pick your spot and stick with it. This is important to striking the ball with conviction. Although it’s best to try to find an opening, don’t worry if your shot gets blocked because a lot of times deflections can lead to goals.

-Keep your eye on the ball. A common mistake players make is to pull their head up too quickly, so be sure to keep your head down and focused on the ball until after you’ve hit it.

-Step beside the ball with your plant food. This should be about a 1-2 feet away and be pointing in the direction you’re going to shoot.

-Strike the ball in between the middle and the bottom. Keep in mind that the more you hit underneath the ball, the higher your shot will go.

-Follow through with your shooting foot, it should be the first foot to touch the ground after your shot.

In some scenarios, placement over power is the name of the game. This is especially true if you’re in or around the penalty area and you want to tuck the ball away past the keeper with a bit more finesse. The biggest difference between a finesse shot and a powerful shot is the part of the foot that is used to strike the ball. In this case, instead of hitting it with your laces, you’ll want to use the inside of your foot as if you are passing the ball. ‘Pass it into the corners’ is a good way to think about finishing accurately and away from the goalie. Here’s a technical break down for accurate finishing in more detail:

-Pick your spot. Just as with a powerful shot you’ll want to know exactly where you want to place the ball before shooting. Aiming for the corners of the goal is usually the best way to go.

-Keep your head down and eye on the ball. This will help ensure that you connect with the ball exactly how you want to.

-Step beside the ball with your plant foot and strike through the center of the ball with the inside of your shooting foot. Don’t be afraid to strike firmly- just because you’re going for accuracy doesn’t mean you can’t put some pace on your shot.

-Stay calm and follow through with your shooting leg before bringing your head up.

With practice you’ll be able to master both techniques and gain confidence in your shooting ability. Believe it or not, confidence can play a huge role in your ability to convert shots into goals. The more you believe in yourself, the higher your chances of succeeding.

With practice you’ll be able to master both techniques and gain confidence in your shooting ability. Believe it or not, confidence can play a huge role in your ability to convert shots into goals. The more you believe in yourself, the higher your chances of succeeding.

If you've been practicing for awhile and you're looking to take your shooting to the next level, here are a few things to think about to give yourself an edge:

-Improving on field awarness can provide a huge advantage when it comes to shooting. When you know what's around you you're more likely to put yourself in good positions for optimal goal scoring chances. In addition, if you're able to find pockets of space you'll have more time and less pressure from defenders to finish the way you'd like.

-Always take note of where the goal keeper is- are they leaning one way? Perhaps they're slightly out of position? To beat them take notice of these things so that you can choose the best type of shot.

-Having the ability to shoot with both feet is very important. If you can only shoot with one foot, defenders will catch on and force you to your weak foot meaning you'll be much less effective. It's worth it to spend time training both sides!

-Visualization can be a powerful technique in sports. Imagining yourself in goal scoring situations before they happen can help ensure you're prepared when they come about in a game.

-Try to replicate the conditions of a match when you're practicing. This means try to shoot when there's real defenders and keepers present. If you never shoot under pressure in practice, you won't be prepared to stay composed when you're going for real. If anything, making the practice environment more intense than the game will help you stay calm and relax when you're playing in a match.

When practicing shooting on your own it's a good idea to practice at different speeds, angles, and positions to replicate different situations. In order to improve accuracy it can be helpful to place something in the goal to aim for. For instance this could be a cone, a jersey, or some other object that you can hit.

If you've got a few friends to practice with, the following video goes over a few ideas to practice shooting in different scenarios.

Although this shooting exercise works well in small groups as shown in the video, it is also a great way for many players to work on shooting at the same time and get lots repetitions in front of goal. Form two lines at the posts, take turns running to the top of the box, turn, and finish on goal!

Shooting To 2v1 In Waves

2v1 drills offer a great way for players to work on shooting because the offensive players outnumbers the defence. In 2v1 situations, there should always be an open player for a shot. In this variation play starts with one player taking a shot on goal uncontested, then turning around to defend against the players in the other two lines.

To work on longer shots, the 3v1 long range shooting game is an excellent choice. Here teams need to navigate past a defender to enter the middle area where they can have a go on goal.