Few players have accomplished as much at the top levels of football for as long as Cristiano has. In this article we discuss how Ronaldo became one of the all-time greats. 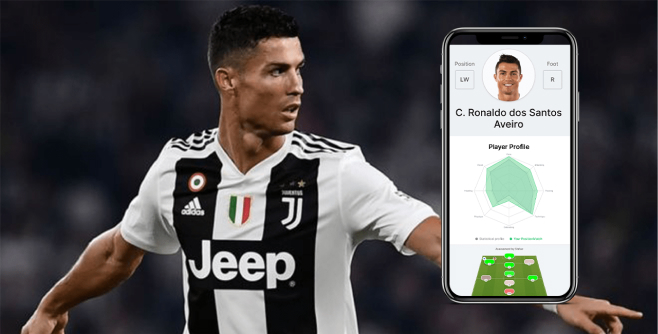 When discussing the game’s all-time greats, Cristiano Ronaldo is a name that often bubbles to the surface; an impressive feat for someone playing in the same era as the likes of Lionel Messi. You can’t deny it, few players have accomplished as much at the top levels of football for as long as Cristiano has. From several major leagues at the club level to the international ranks with Portugal- wherever he has gone he has found both individual and team success. Have you ever wondered just what it is about Ronaldo that makes him so special? In this article we’ll deconstruct some of the biggest factors that have lead to his massive success and then we’ll go into detail as to what makes him so lethal on the pitch. Whether you’re a coach or player, there’s a lot of lessons that can be learned through studying Cristiano Ronaldo.

Football is a game played out on the pitch, but often times the real battle takes place in a player’s mind. When researching for this article it quickly became obvious that Ronaldo has an impeccable mindset and to ignore the psychological aspects that have lead to his success would definitely be an injustice.

First consider this: when Ronaldo was playing under Sir Alex Ferguson at Manchester United he seemingly had everything. From a great mentor, titles, and individual honors, it’s really hard to imagine a better situation to be playing in. But then he left for Real Madrid. Nine years later he again found himself in a great situation having won everything imaginable during his time in the Spanish capital. That’s putting it lightly actually, the Galácticos had just won their third Champions League final in a row when he decided to move on to Juventus.

When you listen to Ronaldo describe why he made these decisions in interviews it offers a glimpse into his psychological make up. In a nutshell, he’s a competitive guy and he likes to push himself by pursuing new challenges. From learning new languages, playing with different coaches and players, and testing his skills in a variety of situations, Ronaldo understands that constantly evolving and pushing one’s limits is the key to staying on top.

´I always try for a new challenge. I really like to put myself under pressure to see what I can do.’ – Cristiano Ronaldo

Pursuing new challenges is one thing, but rising above the challenges and succeeding is another. To his very core, Ronaldo is filled with an extreme amount of confidence. This confidence didn’t come out of thin air, he’s worked extremely hard throughout his entire career and earned it through his perfectionism and obsession with being the best.

´The way this boy [Ronaldo] has worked since he was 17, his perfectionism, his obsession, he wants to be the one. For him, it is not enough to be good. He has to be the best.’ - Carlos Queiroz

Combining confidence and determination is a true recipe for success in almost any endeavor and it’s the cornerstone of what has gotten Ronaldo to where he is today. Another way to think about this is through something called ‘The Belief-Success Cycle’ developed by inspirational speaker Tony Robbins. In essence, the more you believe in yourself, the more likely you are to take massive action. In addition, the more action you take, the more likely you are to be successful, thus reinforcing your beliefs. It’s a positive feedback loop where confidence and hard work are rewarded time and time again.

‘It's the repetition of affirmations that leads to belief. And once that belief becomes a deep conviction, things begin to happen’. -Muhammad Ali

The Importance of A Mentor

The simple truth is, becoming one of the all-time greats doesn’t happen on its own. Ronaldo has been lucky to be playing alongside other amazing players and under legendary coaches throughout his entire career, undoubtedly helping him achieve what he has today.

For starters, even at a very young age Ronaldo had an intense hunger for success. At the age of just 11 he moved away from his family and joined Sporting Lisbon to compete in the highest Portuguese leagues. Playing as competitively as possible with other strong players helped to solidify his talent which ultimately lead to a Premiere league move at the age of 18.

When Ronaldo first came to Old Trafford he thought he was going to wear the number 28 shirt just as he had done at his previous club Sporting CP. The number 7 shirt which Sir Alex Ferguson insisted he take had been a very special one at United worn by the likes of David Beckham, George Best, and Eric Cantona. This decision helped instill confidence in the young Ronaldo and encouraged him to establish himself as one of the greats. Sir Alex believed in the young talent and this nurturing relationship played a monumental role in Ronaldo’s development.

'For me Sir Alex was my father in football. He was crucial in my career and, outside football, was a great human being with me. Talent isn't everything. You can have it from the cradle, but it is necessary to learn the trade to be the best'. -Cristiano Ronaldo

Ronaldo was robbed of a normal upbringing as his biological father strugged with drinking problems and died when he was at the age of 20. Luckily while at Manchester United, Sir Alex Ferguson was able to play a father figure role in Ronaldo’s life. With a great mentor to guide him, Ronaldo learned many lessons throughout his time in Manchester both on and off the pitch such as how to deal with super stardom, how to play effectively rather than just flashy, and how to be a team player.

Surrounding oneself with great people and finding successful role models are key ingredients to success. Ronaldo benefited from having these pieces in place on his journey to becoming one of the best ever.

The Most Complete Forward The Game Has Ever Seen

Now that we’ve taken some of the psychological and environmental factors into account, let’s break down what makes Ronaldo so great on the field.

If you ever considered Ronaldo to be a flashy, technical player, you’d be right; especially if you look towards the early days of his career. Although he may not dribble as much as he used to, he still possesses impeccable ball control, dazzling top speed, and quick acceleration to fly past opponents with ease.

Simply put, Ronaldo’s shooting ability is brilliant. He can score from almost any range, the term ‘weak foot’ isn’t an accurate description to describe either one of his feet, and to top it all off he’s considered one of the best free kick specialists in the world. In addition, he is extremely talented in the air and often soars over or around opponents to score off of headers or volleys.

If you’d like to incorporate some of Ronaldo’s signature skills into your own game, check out this quick video to learn the Ronaldo Chop, Scissors, and Knuckleball.

Movement off the ball as a forward is extremely important to pull defenders out of position and create space for yourself or teammates. Ronaldo has perfected the art of pulling defenders out of position through his own positioning and movement, especially as he has matured throughout his career. This demonstrates his understanding of the game and shows us that he is more than just flash and dash.

All in all, there are many gifted forwards who possess outstanding capabilities but there are few who can do it all as well as Ronaldo. At his current position, it is virtually impossible to pick a weakness making him one of the most complete forwards the game has ever seen.

Even still, Ronaldo works tirelessly to keep improving. He’s never satisfied and is always looking to take his game to the next level. It’s this mindset that got him to where he is today and the biggest reason why so many find him to be such an inspirational player.

‘I feel an endless need to learn, to improve, to evolve, not only to please the coach and the fans, but also to feel satisfied with myself. It is my conviction that there are no limits to learning, and that it can never stop, no matter what our age.’ -Cristiano Ronaldo