A Tactical Analysis of Joshua Kimmich

Joshua Kimmich is a truly sensational player who has the tactical flexibility to play at a world class level in several different positions on the field. Here is how he does it! 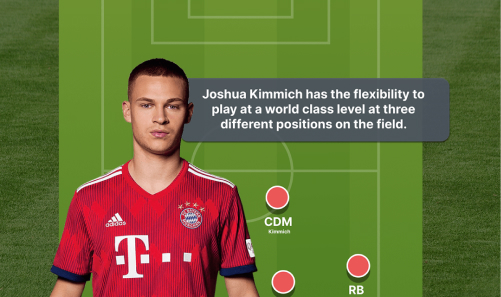 Joshua Kimmich is a truly sensational player who has the tactical flexibility to play at a world class level in several different positions on the field. From center back, to defensive midfield, to right back, Bayern were not hesitant to deploy Kimmich in multiple different positions over the course of their recent Champions League winning season. As such, it takes a special player with a high football IQ to excell in multiple different roles so there is a lot we can learn from Kimmich. In this article we will show you how he does it!

Compared to most center backs, Kimmich has a high degree of technical skill. This can especially come in handy when Bayern look to play out of the back. While many CBs are susceptible to an opponent's press, Kimmich stays calm and composed as he is easily able to orchestrate the build up play with either short or long passes.

Although Kimmich standing at just 1,8 meters tall doesn't look like a typical center back, he also excelled in this role on the defensive side of the ball. Because Bayern like to press the opposition high up the pitch, they like to play with a high defensive line to reduce their opponent's space. Although Neuer can act as a 'sweeper keeper' and is quick to come off his line, it's still advantageous to have speedy defenders who can recover and hang with fast attackers when balls are played over the top. With Kimmich being slightly quicker than the average center back, this gives him an edge when playing in Bayern's aggressive tactical system.

When deployed in the defensive midfield position, Kimmich also plays a pivotal role for Bayern. With his technical skill set and superior passing abilities he is also a huge asset in building out of the back in this position. He does this typically in one of two ways. First he can drop deep into the back line between the two center backs and bring the ball up with the entire field in front of him. This allows Bayern's speedy fullbacks to push up and provide width in attack.

The other way is by acting as a link between the defensive line and midfield. This allows the other midfielders to push up and play in more of an attacking role while Kimmich has the ability to move the ball forward.

In the right back position Kimmich also contributes to the build up play with his ability to play both short and long. Often times he's able to find Müller or Lewandowski high up the pitch, even from this position. He also has the ability to make overlapping runs up the field, provide width in attack, and send great crosses into the box.

Often times when Kimmich is playing right back, Alphonso Davies is playing his counterpart on the left side. Davies is a speedy attacking minded fullback so when he pushes up the field, Kimmich can help to balance things out by shifting towards the middle and forming a defacto back three with the two center backs to cover against any counter attacks.