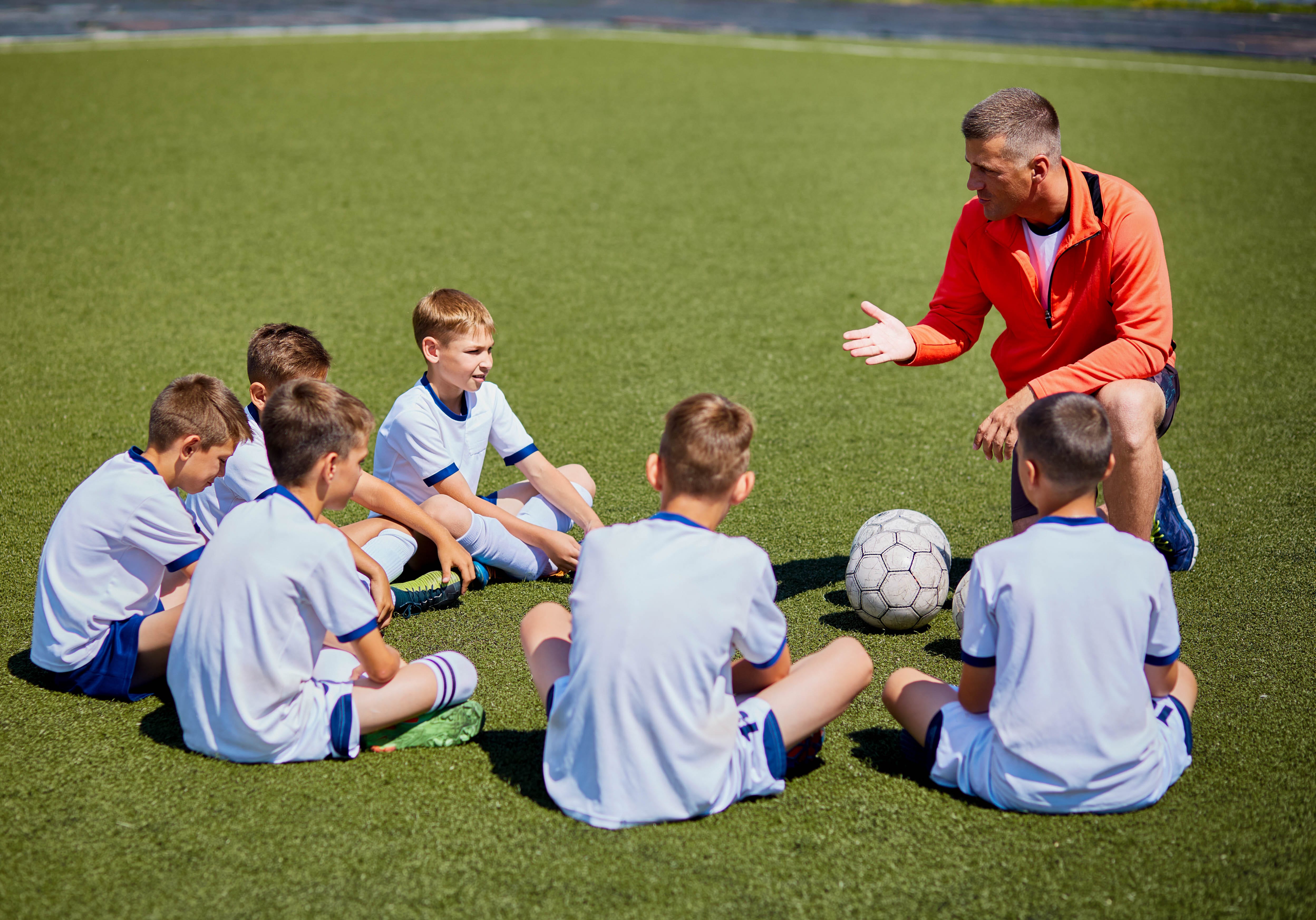 Just what exactly is it that makes a great football coach? When you think about it, coaches have a lot of responsibilities from organizing trainings, developing game plans, communicating with players, and much more. When it comes down to it though, successful coaches share some crucial common attributes which set them apart from the rest.

So what’s the secret?

Here’s the thing, often times people tend to focus on the tactical or strategic aspects of what makes coaches great. But consider this, according to inspirational speaker Tony Robbins, only 20% of an individual’s success is due to strategies and tactics! In fact, 80% of an individual’s success is determined by their psychology. As a coach, having the right attitude and mindset is essential for inspiring players, developing the team, and creating a winning culture.

In this article we’ll take a look at five qualities of successful football coaches that you can incorporate immediately to develop a winning psychology within your organization. What’s more these qualities are not only applicable to coaching football, they are cornerstones for success in other sports, business, and more. When a coach embodies these traits, it has a cumulative effect by rubbing off on those around them as players tend to emulate the characteristics of their leader. So let’s jump in and see how you can get started developing an atmosphere that breeds success.

First things first, never underestimate the power of positivity. One of the things that sets successful individuals apart from those who fail is their unwavering belief in their ability to achieve their goals. Having belief in oneself is critical to achieving just about anything in life.

Think about this, if someone doesn’t believe in themselves, why would they go the extra mile to try to reach their goal? If they don’t think they’re going to make it regardless of what they do, they’re less likely to take the actions necessary to succeed. On the other hand, true believers take massive action and go the extra mile. They don’t stop until they reach their final goal because all along the way they never questioned their ability to succeed.

As a coach it’s important to instill this attitude of belief into your players and the best way to do this is by cultivating a positive team environment. Having a positive attitude and belief in your team is not only contagious to those around you, but it’s vital to helping your team reach it’s full potential.

Consider this, most people respond better to praise than they do from criticism. Focusing on what people do well builds enthusiasm and optimism. In fact, according to the Harvard Business Review, the ideal praise to criticism ratio is five good things for every one piece of criticism or feedback. Although pointing out what’s wrong is necessary for players to grow and improve, it is much better received when players are enveloped in a positive team culture where they get a lot of positive feedback as well. In an environment such as this, players are more likely to take corrections in a constructive way to improve their game rather than take it personally.

The first step to creating a positive team culture is to lead with positivity and to set the tone as a coach. Always try to focus on the good and praise players for what they do well. This is key to making your players feel confident, accept your ideas, and become the best they can be.

‘I try to be positive. I speak to my players about how we have to play, respect the rules. What I have done is always be positive.’ - Pep Guardiola

The simple truth is, coaches have to win the trust of those around them in order to lead effectively. Trust is developed over time when a coach continuously shows they care. Good coaches model the behavior they expect from their team and in turn earn the respect and admiration of their players.

With this in mind, a few ways to cultivate positive relationships is by being accessible and easy to communicate with, listening to what players have to say, and giving each individual the attention they need to grow and develop.

Trying to make everyone happy can be one of the hardest aspects of being a coach, especially when competing at higher levels and issues of positions and playing time rise to the surface. This is where communication is extremely important. Every player on the team has a role to play no matter how big or how small. Let players know what their role is and how they can best help the team succeed. Those with true team spirit not only have a genuine consideration for others, but an eagerness to sacrifice personal interests for the glory and welfare of all.

But let’s make this clear, just because an individual is a team player doesn’t mean they aren’t looking to improve and take on a larger role within the team. As a coach it’s important to show players how they can take their game to the next level which is why the 360Player app provides a plethora of tools to help facilitate development discussions. From assessments, performance reviews, statistics, and feedback through video analytics, the 360Player platform makes it easy for coaches to provide continuous feedback to their players and ensure everyone gets the attention they need to grow.

Features like performance reviews and simple player tagging in analytics makes it easy for coaches to give feedback to players to improve in the 360Player app.

‘I believe one of the best things about managing people is that we can influence lives in a positive way. That's basically what a manager is about. When I can do that, I am very happy.’ - Arsene Wenger

3. The Power of A Growth Mindset

Ever wonder why some individuals are extremely driven and motivated while others don’t seem to push themselves at all? Much of this can explained by a concept Carol Dweck explains in her book ‘Mindset’. If you are unfamiliar with Dweck’s research, let me break it down for you. Dweck describes that there are two types of mindsets- growth and fixed. Essentially, people with growth mindsets believe that talent and intelligence are not fixed traits. On the other hand, fixed minded individuals believe that people are born with talent and that our potential is predetermined.

To put this another way, growth minded individuals attribute success to the result of persistence and effort rather than luck. Naturally the type of mindset we have can have a huge effect on our overall psychology such as how we approach challenges, handle adversity, and respond to feedback.

People with growth mindsets aren’t afraid to take on new challenges because they realize if they fail, it’s an opportunity for growth. They also realize that hard work and persistence are key to achieving their goals and don’t take setbacks personally.

‘Sometimes, it is good to lose – you learn.’ - Thomas Tuchel

As a coach, embracing a growth mindset is key to seeing the potential in all of one’s players. A growth minded coach knows that every player on their team can learn, grow, and improve, even the ones that may not seem physically or technically gifted. Coach with the attitude that all of your players have the potential to make dramatic improvements, believe in them, and inspire them to reach for greatness. Instilling this mentality into your players will encourage them to work hard, pursue their goals, and never give up.

4. The Importance of Teamwork

Top coaches foster a sense of teamwork in their organization in two major ways. First, they have high emotional intelligence and build strong relationships with those around them- but you already knew that because you read point number two. Secondly, they have a clear vision that they communicate with their team.

As a coach it’s important to get everyone in your organization to buy in to your vision. When all of your players are on the same page, harnessing the power of teamwork can have a synergistic effect where the output becomes greater than the sum of the individual parts.

Sometimes teams with extremely talented individuals make the mistake of relying too heavily on individual players. Organizations with a strong team-oriented culture are unfazed even if one of their top players isn’t having their best performance. The importance of a single individual should never detract from your team’s overall mission. Together everyone achieves more.

‘The target for every great champion is to play for the team.’ -Antonio Conte

5. Remember That Enthusiasm Is Contagious

When you truly love what you are doing it brushes off on those around you. This is why it’s so important to enjoy the process and the day to day tasks of coaching. Always remember that success takes time and that if you are expecting instant results, you’re bound to be disappointed. Through following good habits repeated again and again, you’re sure to achieve the goals you set out to conquer. Even though it’s important to have a final destination in mind, great coaches take every opportunity to enjoy the journey along the way. When you’re passionate about what you’re doing, not only will you be having a better time, but you’ll also work harder, longer, and use every day as an opportunity to get better without even realizing it.

Always look for new ways to grow and improve, have patience, and be grateful for the opportunity to coach the beautiful game.

’It needs time. Nobody wants to hear it, but that's the truth: if you want to have success in the future, you have to be ready to work now.’ - Jurgen Klopp